who we are and what we do

Squirrel Nation Studio create experiences from concepts that consider co-existence as an ethic. Our work spans installation and live events, from an urban mushroom farm, reimagining the future of food in a climate emergency, to moving image film, Nature’s Switch, which examines human-plant relationships to red light, and was exhibited in a forest clearing. Leading through intersectional practices, Squirrel Nation is co-founded and creatively directed by artist, designer and researcher, Caroline Ward and neuroscientist and storyteller, Dr Erinma Ochu.

Squirrel Nation were artists in residence in The Stuart Hall Library/INIVA (2018) and Jerwood Fellows at Manchester International Festival in 2017 and 2019. In 2020-21 we are Fellows examining racial justice and the ethics of Artificial Intelligence with JUSTAI/ Ada Lovelace Institute.

Caroline Ward is an artist, designer and researcher whose practice spans moving image, performance, digital interaction and installation. Her critical practice explores the public imagination as a contested site and care as an ethic, informed by architecture, human sciences and technology, and focused on posthuman perspectives. She has a Masters in Research at The Royal College of Art. She has worked as designer and researcher at BBC Future Experiences, The Helen Hamlyn Centre for Design and is currently at Wellcome. 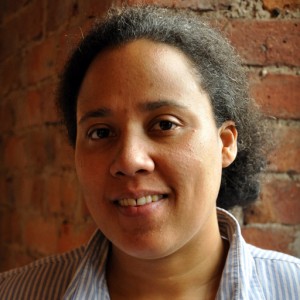 Trained originally as a neuroscientist, with a PhD from The University of Manchester, Erinma worked in broadcast TV and independent film before securing a Sci-Art fellowship to evolve their practice at the intersection of art, science and digital participation through scriptwriting and artist film. As an EAVE-trained producer and curator, Erinma has executive produced independent film slates and exhibits for B3 Media. They are senior lecturer in Digital Media and Communication at Manchester Metropolitan University.